THE Miracle, with a capital M, is the very fact that after almost four millenium, we still live in the same exact place, where we started. In the first Jewish city in Israel. In Hebron.

Over the years, numerous archeological excavations have been carried out in Hebron, most specifically in the area of Tel Hebron, commonly known as Tel Rumeida. Many fascinating finds have marked the success of these excavations. Just to name a few:

A wall, which surrounded the ancient city, used for over a thousand years, that is, from the Patriarchal era through that of the First Temple period, until the days of King Hezekiah, 2,700 years ago.

Also discovered from the days of Hezekiah, seals in stone, with the word Hebron, in ancient Hebrew, embedded on them.

And most recently, two huge Mikvas, that is, pools used for ritual purity, from two thousand years ago, this is, during the time of the Second Temple.

There is today, an archeological Biblical Timeline of an almost continuous Jewish presence in Hebron for almost 4,000 years.

Despite these facts, which speak for themselves, we have been told time and time again that Hebron is a ‘palestinian city,’ to which Jews have no rights whatsoever. A few years ago UNESCO, an anti semitic, anti Israel United Nations organization, declared the Tomb of the Patriarchs to be an ‘endangered palestinian heritage site.’ And this year, about a month ago, they decreed that this site, the 2nd holiest place to the Jewish people in all the world, to be ‘located in the occupied palestinian territories.’

As such, due to massive pressures exerted by the UN, the EU, the Russians and the United States, it was virtually impossible to build in Hebron, that is, in Jewish Hebron. Our Arab neighbors built and built and built, wherever and whenever. But Jews, on their own proven land were told no construction, anywhere, which stunted any possible community growth, excepting childbirth.

But now, at present, we are witness to more and more of those timeless miracles.

In the 1870s a huge building was constructed by Chaim Avraham Romano. In the early 1900s it was purchased by Chabad, and homed a major yeshiva, Torah Academy. A part of that land today houses a small number of Hebron families, living in crowded mobile homes. About a month ago, Defense Minister Avigdor Lieberman announced that we would now be able to build on that land, thereby creating homes, real homes, for over thirty new Jewish families in Hebron.

That was nothing less than a minor miracle, the renewal of Jewish construction in Hebron.

Way back, in 1807, Hebron resident Rabbi Chaim Bejaio purchased a five-dunam plot of land adjacent to the centuries-old Jewish Quarter, for 1,200 grushim. The deal was witnessed and signed by no fewer than 22 Hebron Arab notables. This property served Hebron’s Jews and later accommodated the home and synagogue of its chief rabbi, Eliyahu Manni.

Following the Jordanian occupation of Hebron in 1948, the entire Jewish Quarter – founded by Spanish-Jewish exiles in 1540 – was razed to the ground. Among the structures destroyed was the ancient Avraham Avinu Synagogue. In the early 1960s, an Arab fruit and vegetable market was constructed on the property bought by the Hebron community in 1807.

Following the liberation of Hebron during the 1967 Six Day War, these structures continued to function, having been rented to the Hebron Arab municipality by the Israeli government. The property contracts for these buildings expired in the 1990s, and the site was gradually closed over a period of several years, due to security concerns. The market was finally shut down following an attempted terrorist attack: Arabs placed a booby-trapped teddy bear in a plastic bag in the market near the entrance to the Jewish neighborhood, hoping a Jewish child, finding it, would play with it and be killed in the ensuing explosion.

Despite numerous requests by our community to rent the structures, the site was left vacant.

On March 26, 2001, at the beginning of the Oslo War an Arab sniper shot and killed 10-month-old Shalhevet Pass. Following the murder, Hebron children began utilizing the abandoned Arab shuk as a place to play and take cover during shooting attacks from the overlooking Abu Sneneh Hills. Over a period of time, the Hebron community invested tens of thousands of dollars to convert the former fruit and vegetable stalls into livable apartments. The former market, housed Hebron families and a Torah study hall opened in Shalhevet’s memory.

In response to an Arab demand to reopen the market, the Attorney-General’s office notified the Supreme Court that: (1) the Arabs no longer had any legal rights to the market and (2) that Israeli “trespassers” would be evicted from the site.

The Supreme Court, however, never ruled that the former market’s Jewish population should be expelled from their homes.

The reason behind the attorney-general’s decision is summed up in his own words: “The criminal must not be rewarded.”

The criminal, in this case, was not defined as the Arabs who murdered 67 Jews, destroyed the Jewish Quarter, shot at Hebron Jews from the surrounding hills and killed Shalhevet Pass. Rather, the criminal was defined as Hebron’s Jews, who had “usurped” the vacant buildings belonging to the State of Israel.

Following issuance of an eviction order, Hebron’s Jewish community appealed to the courts, claiming private Jewish ownership of the property. An appeals committee of three judges ruled 2-1 that the land did legally belong to a private Jewish organization, but that the buildings legally fell within the jurisdiction of the Israeli government.

Concurrently, two of the three judges ruled that the optimal solution to the problem was to lease the structures to Hebron’s Jewish community.

Of course, this decision was not implemented; it was rejected by the then state Attorney General Eliyakim Rubenstein.

After the expulsion from Gush Katif, the prosecutor’s office decided to finally evict families from these apartments also. The day prior to the planned expulsion, community leaders met with General Yair Golan, commander of forces in Judea and Samaria, who offered them a deal. If the community would agree to voluntarily leave the apartments, the government would allow families to ‘legally’ return within a few months. Following a debate and vote in the middle of the night, the community accepted the deal. The next day the families moved out. A few days later the Attorney General, Menachem Mazuz, publicly announced that ‘there had never been a deal.’ He later changed this, stating that there had been an agreement, but General Yair Golan was unauthorized to finalize such a deal and it was null and void. This, despite the fact that Golan conducted numerous conversations with his superiors in the Defense ministry during the meeting with him in order to receive authorization to conclude the agreement.

Ten months after, two of the families who had agreed to move out of their homes, moved back in. Left with nowhere to live, and realizing that the agreement would never be honored, they decided enough is enough. With community backing, they returned to their abandoned homes. A few weeks later the Supreme Court ruled that the government had the authority to again expel them, should they want to. The Israeli prosecutor’s office, together with the ‘Civil Administration’ immediately issued expulsion orders. The families, with community support, refused to again leave voluntarily. The expulsion orders were executed. The families were expelled and the buildings destroyed.

And since then, since August 2007 those structures have remained empty.

This morning again, Defense Minister Lieberman announced that this land is now to be returned to the Hebron Jewish community, allowing us to begin plans for construction of new Jewish buildings at this site.

This is not a minor miracle. Rather it is a major miracle!

Tomorrow, literally tens of thousands of Jews will pour into Hebron to celebrate Abraham’s purchase of Ma’arat HaMachpela, caves of the Patriarchs and Matriarchs, for 400 pieces of silver, today valued at about 700,000 dollars. This Torah portion, to be read on Shabbat, will be recited at this very site, bought for a small fortune almost 4,000 years ago.

For 700 years Jews were forbidden from entering this holy place. Yet, we never gave up. We have not ever, and will not ever, surrender to those who would be happily expel us again, not only from Hebron, but from all of Israel.

And this Shabbat, we will all celebrate the birthday of our people in our land, at the veritable roots of the Jewish people, here in Hebron. 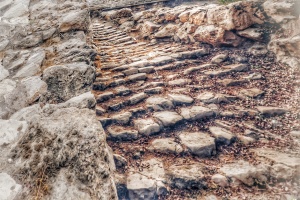 Photos of the day